If you are like me right now your self image is at an all time low.

IF you are like me the holiday food and spirits is sitting in your gut (which your husband just called “puffy”).

If you are like me you have been unable to exercise much because your kids are home, or it’s quite cold and or you have been to busy with family stuff.

If you are like me you have a hacking cough that has lasted weeks. This cough has spread to all parts of your family.

If you are like me you have been up in the night with one of your kids because they are sick.

If you are like me this cough is so bad that you threw up in the Best Buy parking lot ( sorry person who pulled in the space after me).

If you are like me your cough is so bad that your post childbearing body turned on you and you pissed in your pants.

( Note: Vivien is wearing the dress she created on www.fashionplaytes.com.  A great site for little girls)

Well, when life gets you down, you have to turn it around, right?  So here is a short, self help moment for all of us.  ( Jo McGinley, my friend, guest stars)

“Vivien, would you like your own laptop?” I had been approached by a PR firm reagrding a laptop for kids age 5 to 10 that Best Buy was selling exclusively.  I do very few product reviews, but this sounded intriguing.  It’s also a big issue now.  Kids want access to a computer and the net, but their are reservations on the parent of parents.  Me included. The laptop is the FIRST SPARK™ kids PC . Featuring the Toshiba L635. (retails for $499.00)

(from the Best Buy website) This full-sized laptop was made specifically for kids and their parents. Get peace of mind with hardware features like a wipeable keyboard, and software to help you keep your kids secure while playing games or browsing the Internet. 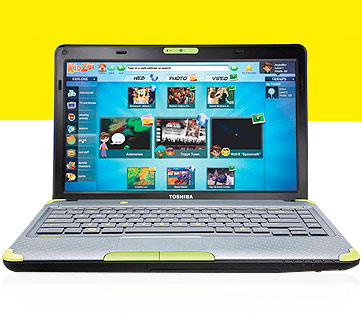 “no, thanks”  she said flopping onto the couch.  Her 16 year old brother, “Well, wouldn’t you like to at least see it and then decide?” not understanding why she would refuse such an offer.

“okay” She shrugged.  Obviously a computer is essential in a teens life, but maybe not in a child’s.  Questionable whether one should be.  Nonetheless I agreed to receive it for FREE to give a review. they wanted a child’s review of it.

When we unwrapped it Vivien was excited to see it.  I thought it was quite good looking. She sat with me as we did the intial logging on and figuring the various programs out.  She was a trooper and hung in there, but in retrospect I think that was a mistake on my part.  She was getting anxious waiting for the fun to start.  “Princess and the Frog” and “Toy Story 2” are said to be loaded on the hard drive, but we couldn’t get that going.  I subsequently received further directions about playing them, but it was no go for us.

The Net Nanny comes loaded on it which I really like a lot as my chief problem with kids having a computer is being exposed to unsavory sites and people.

“I want to play games”  Vivien said.  Great, we started a few, but the dexterity required her to move the thumb to click and the index finger as a mouse was impossible for her five year old hand.  I became the clicker, she the mouse while we went through some games.  Rex was grabbing at my leg for attention, I saw the sun set behind us.  All of the games had written directions and she can only read a few words, so I had to be at her side the whole time for literacy and fingers.  I realized unlike the the TV babysitter, this was not going to make life easier for me.

“is this the best use of our time? ” I thought.

Finally Vivien’s frustration blew.  We had been at it for over an hour. “Enough, I’ve had it.”

Me: “Should we give this to Lily?” My 9 year old niece

Viv: “yes, Lily, will have a better time with it than me.”  She climbed off her perch and started to play with the neglected Rex.

Lily and my sister Cecily were thrilled when I called, “want a laptop?”

Cecily took possesion of it.

“I took it to a coffee house to get to know it before I gave it to Lily, so I could get the lay of the land. Took me a little while just to know a PC, I’ve been working with a Mac for years.The first thing that struck me was it was nice and light and had a good feel. It felt like little hands could use it.  I really like the washable key board because I can’t stand the crap that falls within the cracks of a regular keyboard.

I was confused by the net nanny.  It came up intially and I like the idea of it for protecting my child, but I haven’t been able to test it. I think it’s partly because Daphne set it up and we need to reconfigure passwords and such.

I went home and gave it to Lily who was very excited to have her own laptop. Then I let her noodle around with it.  I showed her the kids browser.  Then last night we sat down together and I had her show me what she was doing.  We used the KidZui browser which is great because everything that is shown has been vetted by teachers and parents.  We tested it to see if playboy.com would come up and it doesn’t.  This is very important.  There are cute touches like you can make an avatar and name it and if their friends are on they can talk to each other, but it’s protected.  The parent has to approve them. It’s not chat roulette.

As long as the net nanny is activated  and the Kidzui is up they can’t get through to something you don’t want them to.  Also you get weekly reports on where they have gone and length of time online.”

Here is what the 9 year old Lily has to say about it. My questions are in bold.

Lily: ” I thought it was pretty for a laptop.”

was it easy for you to figure it out?

Lily: “yes, it was self explanatory”

did you need your parents to help you?

Lily “not much, if I got confused or if wanted to change a name or if it got frozen.”

what have you most enjoyed?

Lily:  “going on the internet, it saves time it has categories, like ‘totally girl” it takes me to non violent videos from you tube” ( note: you can not get on you tube directly) You could use it for homework, they have “homework helper” like multiplication tables.”

what will you use this computer for the most?

“yes, because there is a web came and we can talk on kidzui. I haven’t done the skype, but I’m going to ask my friend if she will with me.”

To wrap it up here is a video of Lily and her mom Cecily ( the sister making her first Coolmom appearance) summing up their thoughts.